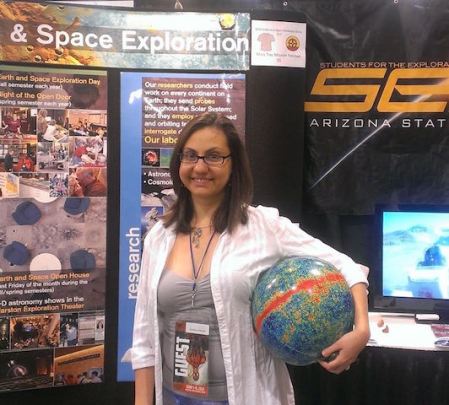 Svet’s research seeks to inform biosignature studies on Mars using rover-like instrumentation such as Raman and fluorescence spectroscopy. At the Carnegie Geophysical Laboratory, she studies carbon phases in Mars analog samples from Arctic sandstones to ancient lakes deposits, and in martian meteorites. She holds a PhD from Arizona State University (Dec. 2016) with an emphasis in astrobiology. Since entering the astrobiology community, Svet has played a key role in serving it. First, she has relentlessly striven to foster the next generation of astrobiologists. In Arizona, she developed “Classroom Astrobiology”, curricula for grades 1-12 aimed at STEM teachers, parents, and camp and after-school programs to develop scientific inquiry through activities built around the Drake equation. She has made this content available to all (http://saganet.org/page/saganet-ed), worked in person with educators from the Southwest US and Northern Mexico to implement the curricula in their classrooms, and used their feedback over multiple years to improve classroom activities. In addition, she was the featured scientist in an episode of STEM Journals (http://www.cox7.com/video/paleontology), a TV show aired on Cox Channel 7 and aimed at elementary and middle schoolers. She has also volunteered to directly inspire K-12 students by mentoring an elementary schooler on a science project on martian volcanoes, interacting online to introduce a California student on probation to astrobiology, and participating in multiple STEM events in Phoenix such as Arizona State University’s Earth & Space Open House, the Phoenix ComiCon, and at schools serving under-represented minorities such as Pascua Yaqui and Sacaton Elementary. She continues to do so in Washington DC, having recently volunteered at the DC STEM Fair and at the USA Science and Engineering Festival for the NASA Astrobiology Program. Second, Svet has been a mentor to several undergraduate students, including students from groups under-represented in astrobiology, whether as research assistants, interns, or conference mentees. She has taken her role far beyond simply providing advice and guidance on research, becoming in several instances a long-lasting role model and friend after the formal end of the mentoring period. Finally, she strengthens the international astrobiology community as Executive Director of SAGANet.org, an outreach-oriented astrobiology network whose mission is to uplift the scientific endeavor by empowering meaningful and authentic public engagement in scientific exploration and to foster a positive culture of public engagement among scientists. SAGANet offers a platform for international groups of astrobiologists and astrobiology enthusiasts to exchange, provides educational content and advice for anyone seeking to join the community, and regularly informs the community of news, opportunities, and meetings in astrobiology. Svet has served each of these aspects: for example, she has advocated astrobiology research at the National Astronomical Research Institute of Thailand, linked early-career astrobiologists mentors and mentees, and provided frequent digests of astrobiology news on SAGANet’s social media. Svet’s multiple roles as a grassroots community builder are poised to have a positive, long-lasting impact on our community. As such, she is fully deserving of the Maggie C. Turnbull Astrobiology Early Career Service Award.